GS had an ugly monthly candle

Posted by Chartrambler at 12:13 No comments: 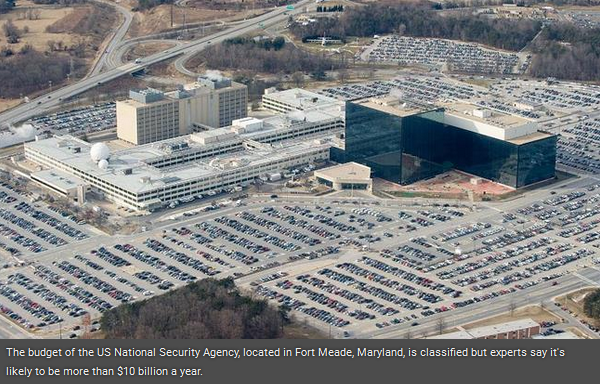 "Those insouciant Americans who do not fear the police state because they “have nothing to hide” desperately need to read: Home-schooled Children Seized By Authorities Still In State Custody.
In Police State America, authorities can enter your home on the basis of an anonymous “tip” that you are, or might be, somehow, abusing your children, or exposing them to medicines that are not in containers with child-proof caps or to household bleach that is not under lock and key, and seize your children into state custody on the grounds that you present a danger to your children.
The government does not have to tell you who your accuser is. It can be your worst enemy or a disgruntled employee, but the tipster is protected. However, you and your family are not."
Posted by Chartrambler at 11:34 No comments:

Posted by Chartrambler at 11:15 No comments:

bearish TT on weekly looks ominous and the last run up was 7 weeks
Posted by Chartrambler at 11:04 No comments:

Posted by Chartrambler at 11:03 No comments:

125 dma busted on the close 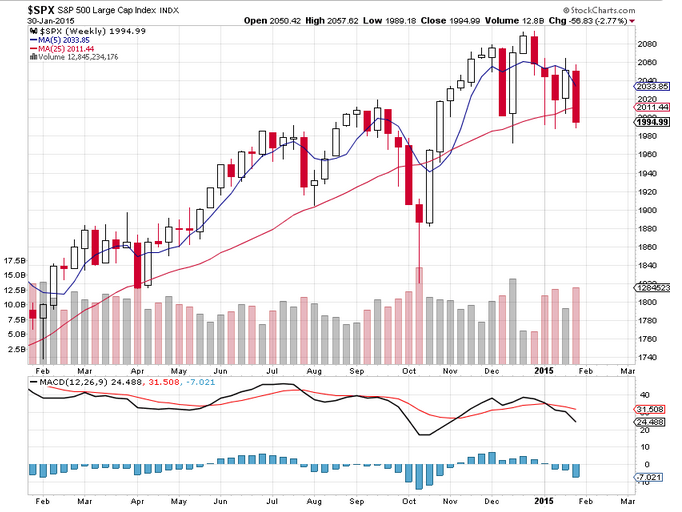 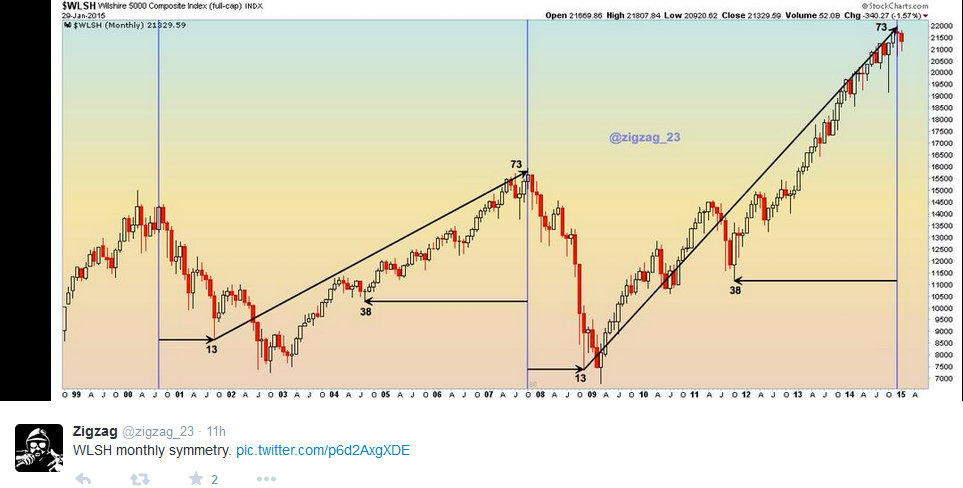 Posted by Chartrambler at 13:59 No comments:

Posted by Chartrambler at 13:46 No comments:

Posted by Chartrambler at 13:22 No comments:

Posted by Chartrambler at 12:00 No comments:

Posted by Chartrambler at 11:59 No comments:

Posted by Chartrambler at 21:00 No comments:

Posted by Chartrambler at 20:59 No comments:

Posted by Chartrambler at 20:31 No comments: 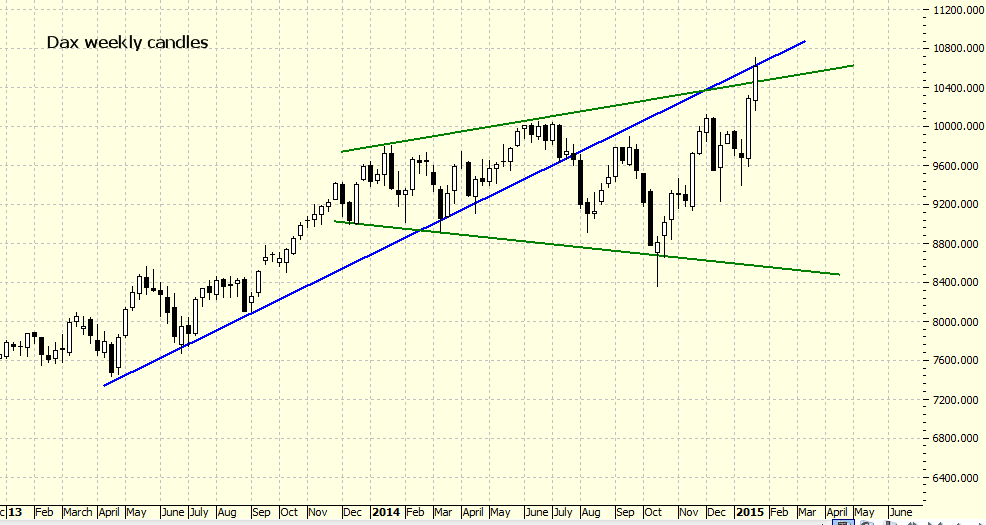 Posted by Chartrambler at 20:30 No comments:

But even that stunning figure understates the savagery of the Obama administration’s war on whistleblowers …
After all, Jeremy Hammond – regarded by many as a whistleblower – was sentenced by Obama to 10 years in prison.
The trial of CIA whistleblower Jeffrey Sterling is proceeding right now … and the prosecution is seeking a lengthy prison sentence.
If Edward Snowden or Julian Assange are ever caught, the government will seek very lengthy sentences.....
Posted by Chartrambler at 12:01 No comments:

TSCO back on sell ?

a shooting star appears to be forming,50% up from the low

Posted by Chartrambler at 11:53 No comments:

"The problem is that the ECB has shown, again and again, that it is
temperamentally and institutionally timid. These more radical proposals
would divide its policy-making board and court political controversy, to
put it mildly. They may also be illegal: The single-currency treaty
forbids "monetary financing" of governments, and last week's guidance
from the EU Court of Justice's advocate general was that sovereign debt
purchases were sometimes permissible
but subject to conditions. The guidance seemed to rule out coordinated
monetary and fiscal expansion (through primary-market bond purchases);
it voiced reservations about the bank's retaining bonds to maturity
(imposing a limit on the duration of QE).
Legal or not, helicopter money would be a frontal repudiation of the
monetary conservatism that Germany's government and others have sought
to impose on the bank. The same goes for anything that looked like
raising the ECB's inflation target."
Posted by Chartrambler at 15:46 8 comments:

Brian Ruhe ,a  Canadian Theravada Buddhist teacher talks about Rothschild Zionism.........I think this is a good thing ....too often (in my view) "spiritual people" avoid such controversial and "dark" subject matter

THE DOLLAR PEGS ARE NEXT

"The next crisis will be the currency pegs against the dollar. Here we have pegs from Hong Kong to the Middle East. We will have the same problem for as the dollar is driven higher, thanks to the implosion in the Euroland, these nations will import DEFLATION from a rising dollar. This will break their backs and force pegs to collapse around the world. Keep in mind that this will unfold probably after 2015.75 and help to spiral the world economy into the worst depression in centuries. Start preparing for a rainy day.
The rise in the dollar, will be the key to breaking the post-war economy. It was the flight of capital from Euroland into the Swiss that broke that peg. We will see in the months ahead the same crisis unfold in the Middle East and in Asia. This will be accelerated by the emerging economies who have issued $6 trillion in dollar debt since 2007. As the dollar rises, they will be forced into the same position as Greece – unable to pay their debts because the debt keeps rising in cost."

(thanks to Benz rabbit for link)
Posted by Chartrambler at 13:50 10 comments:

"We should remind you that just because stocks were the place to be for the last 100 years doesn’t mean they will be a good place to be for the next 100….or even the next 10. You see, in the investment world, there is always ‘more to the story.’ Most of the stock market gains of the last 100 years have come in the years since 1982. And the backstory of those years is the tale of a credit expansion gone wild.

Of all the things twisted and perverted by the great credit expansion, investors’ perceptions are at the top of the list. The money poured in; almost all assets rose in price. And investors – watching this over 3 decades – came to the conclusion that this is just the way it works.

It’s not. The problem with credit expansions is that they are always followed by credit contractions. And the bubbly stock prices you see at the end of the expansion phase turn into the flattened out prices seen in a depression."

from The Daily Reckoning
Posted by Chartrambler at 09:49 No comments: 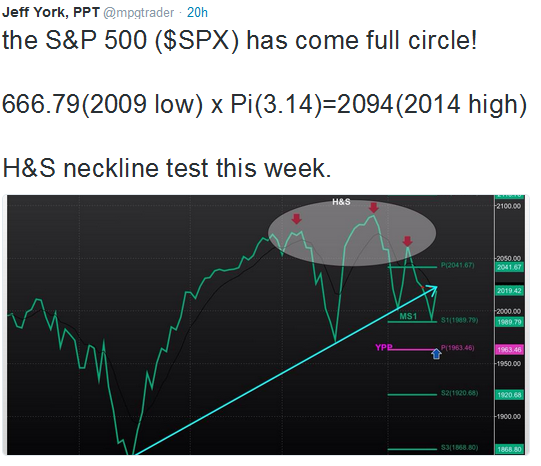 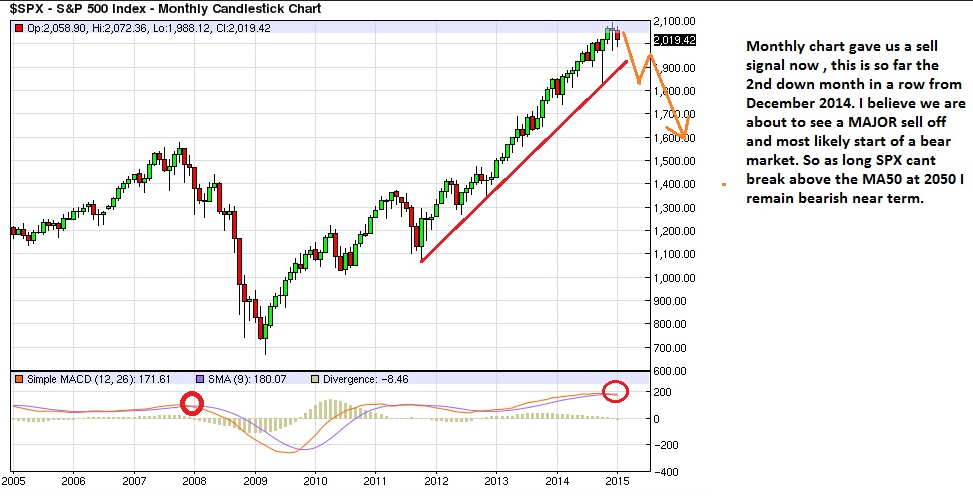 (He is showing the "broadening top pattern for Dax.......I would prefer to wait for a reversal on the Dax rather than jump the gun.)

Posted by Chartrambler at 18:53 No comments:

Posted by Chartrambler at 16:27 No comments:

Posted by Chartrambler at 11:48 No comments:

weekly candle on the Dax was bullish and broke through 10000.The market is awaiting details of Draghi's expected QE programme (this chart was drawn before the close on Friday)

or maybe its a broadening pattern ? (arrows mark 180 degree turns) 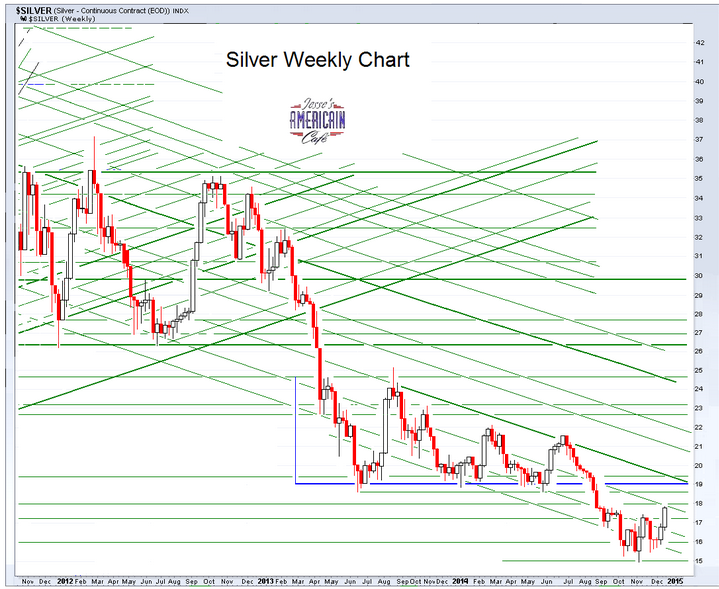 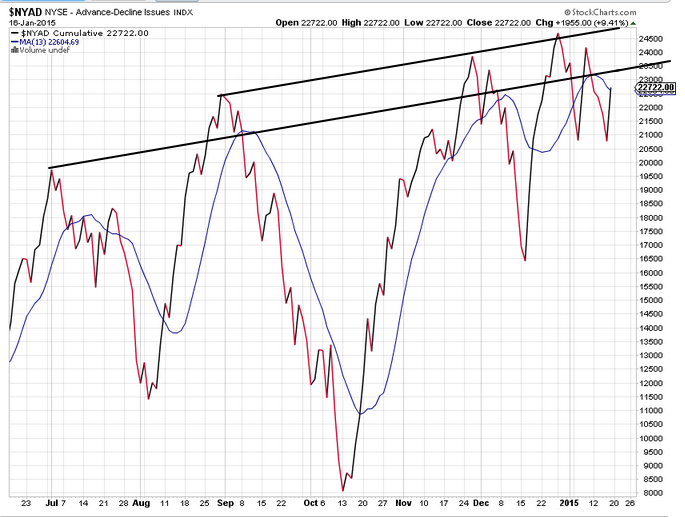 Posted by Chartrambler at 22:49 No comments:

the call on BP looking good....

Posted by Chartrambler at 22:48 No comments:

needs a strong day tomorrow to redeem this ugly candle.See how there was no followthrough after the bullish twin towers pattern,then a bearish engulfing pattern (or close enough)... 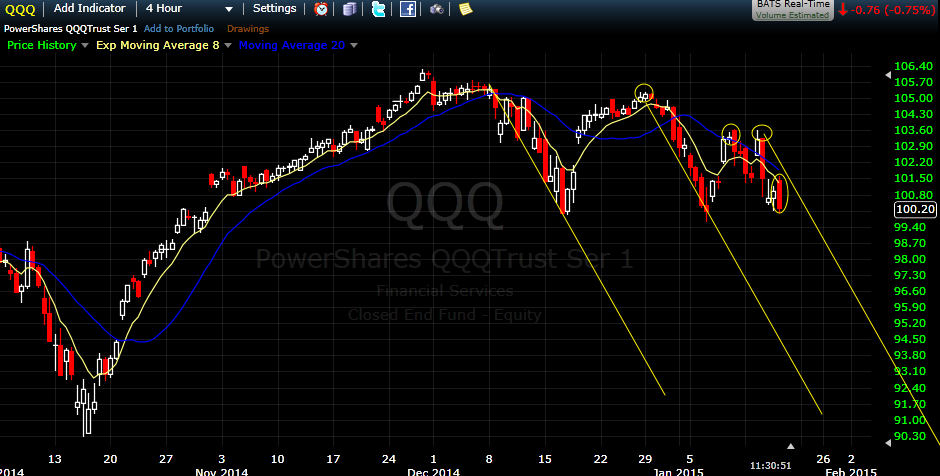 
IBB.....may just keep going but some price and time resistance here and could be 3 drives pattern 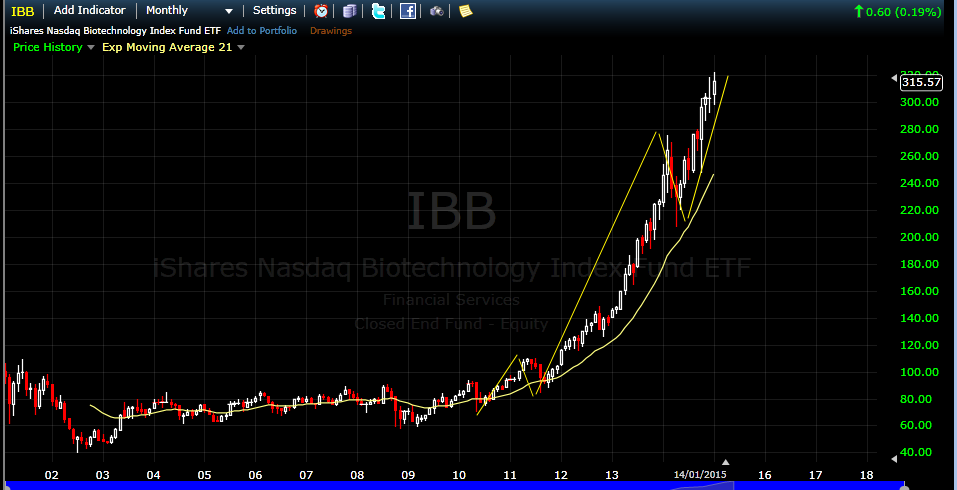 Posted by Chartrambler at 10:36 No comments: 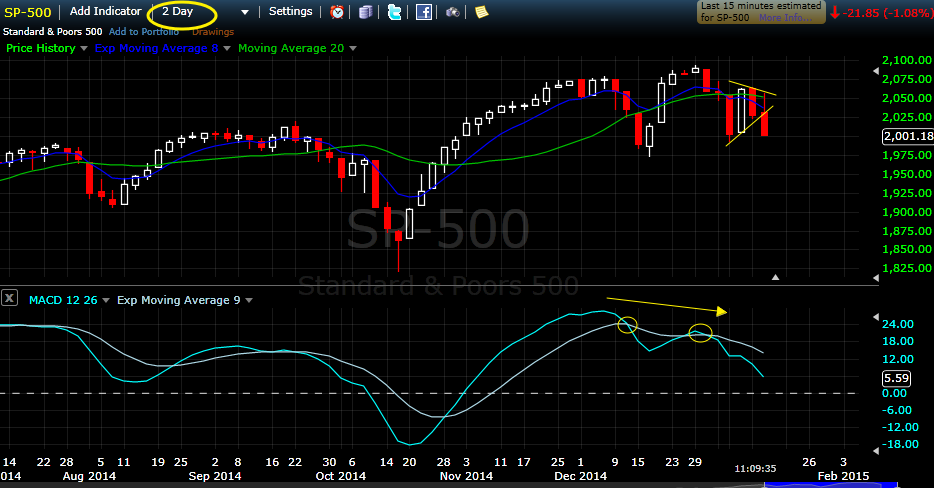 "Without question, the most-censored news story of 2014, as determined by this test — a test that I have been constantly carrying out ever since the May 2nd massacre that the new Ukrainian Government perpetrated in Odessa — is precisely the Ukrainian news story: it’s the winner of my contest. This ongoing news story started with the February 22nd coup, then included the May 2nd massacre which led to Donbass’s secession from Ukraine, and it finally is continuing with this ethnic cleansing of Donbass. The purpose of the May 2nd massacre was, in fact, to terrify the pro-Russians in Ukraine’s southeast — especially in Donbass, the most pro-Russian area — so as to precipitate the secession of Donbass, so that there would then be an excuse for the Ukrainian Government to bomb it and so to get rid of the residents there, whose overwhelming votes had clearly made Yanukovych Ukraine’s President. The Obama regime doesn’t want the people there; it wants only the land on which they live. It needs this in order to be able to place nuclear missiles there, aimed against next-door Russia. The Obama Administration’s game-plan is to keep the land, and to kill the people who are living on it."
Posted by Chartrambler at 15:53 No comments: 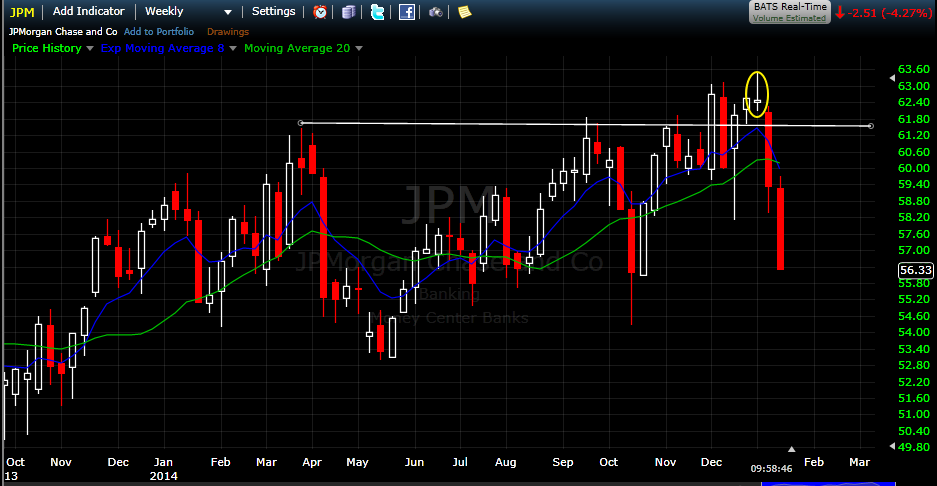 Posted by Chartrambler at 15:43 No comments:

As you will see below, your definition of an “extremist” may be far, far different from the definition that Barack Obama is using.  When you do a Google search, you will find that an “extremist” is defined as “a person who holds extreme or fanatical political or religious views, especially one who resorts to or advocates extreme action.”  According to Wikipedia, “extremism” is “an ideology (particularly in politics or religion), considered to be far outside the mainstream attitudes of a society or to violate common moral standards.  Extremism can take many forms, including political, religious and economic.”  Please notice that neither of those definitions uses the word violence.  In this day and age, you can be considered an “extremist” simply based on what you believe, and as you will see later in this article there are now tens of millions of Americans that are considered to be “extremists” and “potential terrorists” according to official U.S. government documents.

and (from Ron Paul)

If Americans were honest with themselves they would acknowledge that the Republic is no more. We now live in a police state. If we do not recognize and resist this development, freedom and prosperity for all Americans will continue to deteriorate. All liberties in America today are under siege.

It didn’t happen overnight. It took many years of neglect for our liberties to be given away so casually for a promise of security from the politicians. The tragic part is that the more security was promised — physical and economic — the less liberty was protected.

With cradle-to-grave welfare protecting all citizens from any mistakes and a perpetual global war on terrorism, which a majority of Americans were convinced was absolutely necessary for our survival, our security and prosperity has been sacrificed.

It was all based on lies and ignorance. Many came to believe that their best interests were served by giving up a little freedom now and then to gain a better life.

The trap was set. At the beginning of a cycle that systematically undermines liberty with delusions of easy prosperity, the change may actually seem to be beneficial to a few. But to me that’s like excusing embezzlement as a road to leisure and wealth — eventually payment and punishment always come due. One cannot escape the fact that a society’s wealth cannot be sustained or increased without work and productive effort. Yes, some criminal elements can benefit for a while, but reality always sets in.

Reality is now setting in for America and for that matter for most of the world. The piper will get his due even if “the children” have to suffer. The deception of promising “success” has lasted for quite a while. It was accomplished by ever-increasing taxes, deficits, borrowing, and printing press money. In the meantime the policing powers of the federal government were systematically and significantly expanded. No one cared much, as there seemed to be enough “gravy” for the rich, the poor, the politicians, and the bureaucrats.

Posted by Chartrambler at 13:27 No comments:

6% yield -  and chart support. The prudent will wait for a reversal :-)

Posted by Chartrambler at 11:21 No comments:

symbolism in the 2015 cover of The Economist 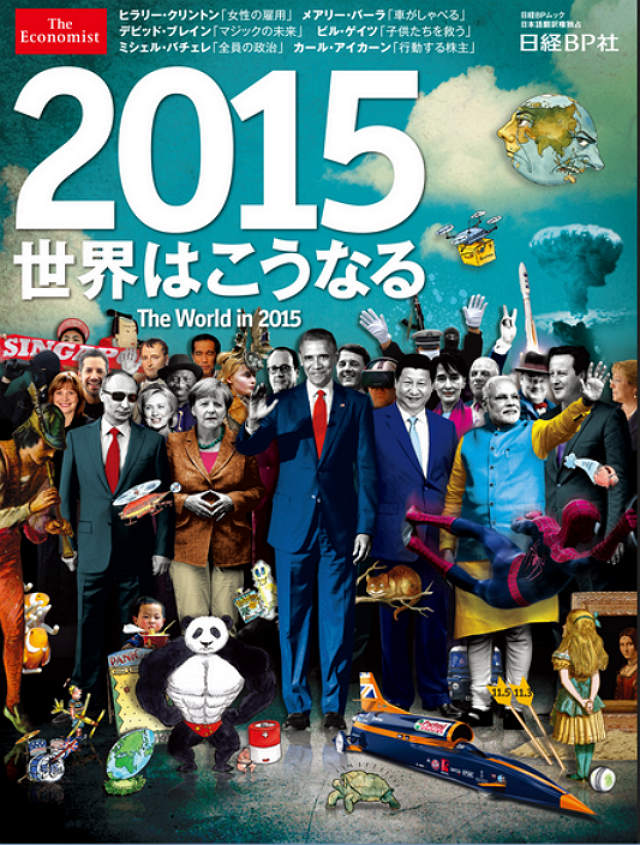 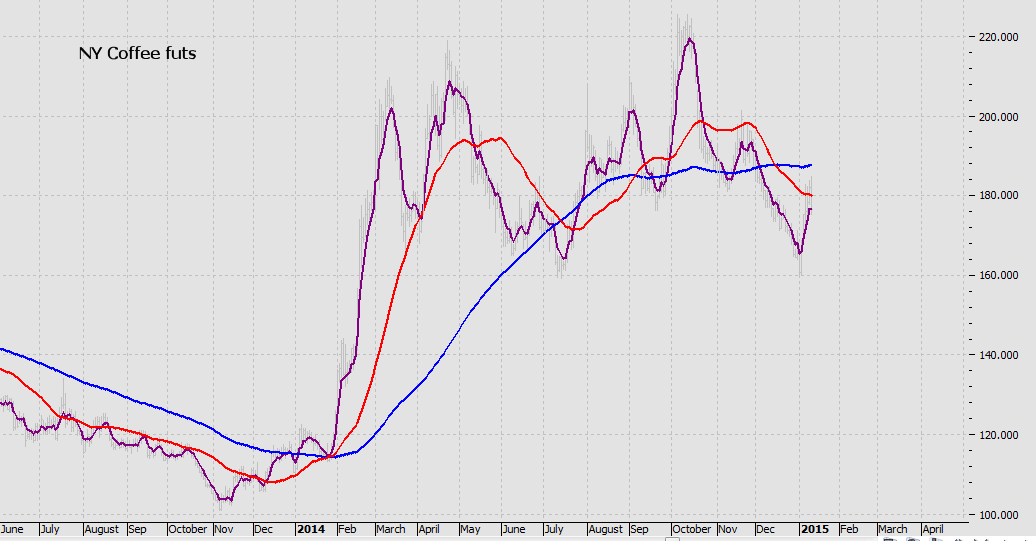 Posted by Chartrambler at 17:57 No comments: