I was looking for a retreat from 6000 or another false break pattern then reverse....instead we have a bullish power candle that looks like it is going to break out....central bankers in command again ? sigh

Posted by Chartrambler at 19:39 No comments:

The nitty gritty details of a Brexit are starting to emerge. Anatole Kaletsky, the chief economist and co-chairman of Gavekal Dragonomics and former columnist at The Times of London, has pointed out that the World Trade Organisation would have a lot to say about British-EU trade under Brexit:
Britain would need to negotiate access to the European single market for its service industries, whereas EU manufacturers would automatically enjoy virtually unlimited rights to sell whatever they wanted in Britain under global World Trade Organization rules.
That’s a whopping argument in favour of Bremain. But where is the estimation of how trade would boom once Britain were free to make unilateral trade deals with countries the EU doesn’t like?
One Capital & Conflict reader emailed in an excellent analysis of the constitutional implications of leaving the EU. The problem is, as for every other argument about Brexit, I’ve heard a persuasive argument on the same issue made for staying in the EU.
Having a supranational government with a developed human rights system reduces the ability of a single government from abusing your human rights. This applies to the UK’s terrorism laws especially. But as reader Dr. D.B. points out below, the British constitutional system is better than the EU one in some or many ways. Of course nobody can agree on what’s better or worse anyway.
Here’s Dr. D.B.’s thoughtful take on this, and thanks for sending it in:
Dear Nickolai,
Thank you for your interesting email.
The key difference between England in the EU and out of the EU is: The Legal and Constitutional System.
Within the EU, there is no Habeas Corpus (i.e. you can be arrested without evidence and imprisoned indefinitely without trial; on release, you have no possibility of compensation). Under the European Arrest Warrant, you can be arrested in Britain (and people have been) and imprisoned in the EU.  Outside the EU, however, we have the English legal system to safeguard our individual liberties.
Within the EU, the individual exists for the benefit of the State. Outside the EU, however, the State exists to serve the individual.
Within the EU, we are powerless to remove those in charge, and the European Parliament is powerless to do anything other than vote on what it has been asked to by the Commission. Our own parliament becomes a rubber-stamping irrelevancy. Outside the EU, however, we can (and often do) eject those in power from their positions by our votes. Our parliament determines the bills that are enshrined into law – and those that are rejected.
Within the EU, our monarch is an irrelevancy: by signing the treaty that took us into the EEC [European Economic Community], she (perhaps traitorously) abdicated her role as the guardian of the rights of the people against any impositions on those rights by government. Outside the EU, however, she would (we hope) resume her constitutional role as representative of the rights of the people against unconstitutional incursions by government.
The structure of the EU is very similar to that of the old USSR. The EU could thus easily slip into a totalitarian dictatorship. If it could... it probably will!
As for our mode of exit, we should forget about Clause 50, and simply declare, unilaterally, that our membership of the EU is unconstitutional, and thus was never valid.
These issues are all (it seems to me) of far greater weight than any of the issues that you mention.
I hope that this is helpful!
Best wishes
Dr. D.B.
Posted by Chartrambler at 22:19 No comments:

Posted by Chartrambler at 21:34 No comments:

thanks to Wile for this link
Posted by Chartrambler at 21:14 No comments:

Posted by Chartrambler at 13:53 No comments:

"We are strong advocates of the charts providing the best and most reliable information. Even the most respected gold and silver experts do not know when the effects of globalist bankers' manipulation will lose their impact. Each week is one week closer to a final resolve, but no one knows if there are 2 more weeks, 20 more weeks or how much longer price can continue sideways to lower in a bottoming process."
Posted by Chartrambler at 11:41 No comments:

so it seems that the Ftse attempted to break through the previous high at 6033,reversed and is back below 6000 and that a top may be in,so we could now fall to to make another low in the 5600 area....if the previous low were to break that would be very bearish

Posted by Chartrambler at 22:41 No comments:

some good charts from Northman trader

on the 2 hr chart the Dow currently looks stuck at the top of a well-defined trading range.The 200ma is flat

Posted by Chartrambler at 16:46 No comments:

An attempt at a wave count :-)

Posted by Chartrambler at 17:22 No comments:

Posted by Chartrambler at 23:51 No comments:

Posted by Chartrambler at 09:01 No comments:

Posted by Chartrambler at 22:20 No comments:

"I find it fascinating the mainstream corporate media and Wall Street shysters spend SO MUCH time talking down gold and spending an inordinate amount of electronic ink trying to convince the masses that only nutjobs would buy it. I believe less than 2% of people have gold in their investment portfolio, so why the endless articles bashing it?


The suppression of gold prices through the paper market since 2011 by the Fed and their Wall Street bank co-conspirators has thus far been successful, but it is fraying at the edges as China continues to accumulate physical gold and pushing the ponzi scheme towards its inevitable conclusion. Soaring gold prices tells the masses central bankers are a fraud, that’s why they are desperate to keep the price capped." 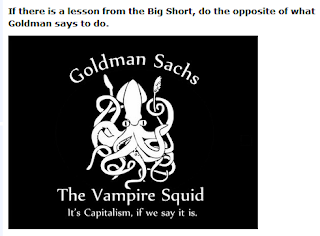 Posted by Chartrambler at 21:56 No comments:

Gold is looking pretty bullish to me. We blasted through the bear fibs setup I posted like there was no resistance there :-) 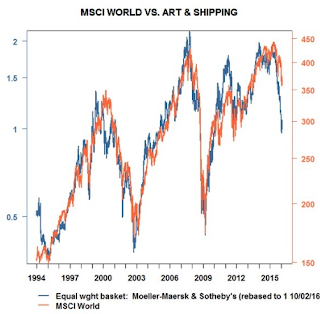 Famed investor Jim Rogers is warning that financial Armageddon is just around the corner, and it's being fueled by moronic central bankers.

"We're all going to pay a horrible price for the incompetence of these central bankers," he said Monday in a TV interview with CNNMoney's Nina dos Santos. "We got a bunch of academics and bureaucrats who don't have a clue what they're doing."

of course,Jim Rogers subscribes to the "incompetence " theory rather than to conspiracy :-)


(thanks to Johnny Geneic for the link)
Posted by Chartrambler at 21:32 No comments:

Friday saw a powerful reversal candle ,rather like the one in November....

I higlighted the measured move from November's candle,which is not to say it will necessarily repeat

reversals above and below the ema's....

Posted by Chartrambler at 09:37 No comments:

possible count for a short term bottom at 5500

Posted by Chartrambler at 10:51 No comments: 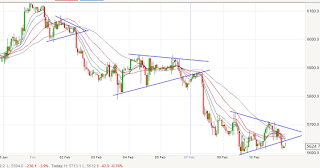 Posted by Chartrambler at 23:18 No comments:

every now and then the numbers just work out :-)

some observations on BKX,the US banking index 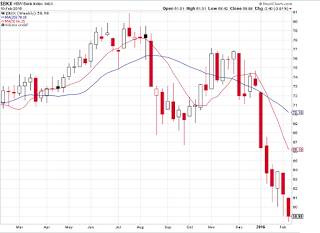 resitance at 1207,look to buy the first higher low on a correction

Posted by Chartrambler at 00:00 No comments:

Posted by Chartrambler at 22:02 No comments:

I am looking down for this week.  suspect the wave 4 count (posted for NYSE a few days back) is in play

Per John Murphy:
It's never a good sign to see the Nasdaq leading the rest of the market lower, which it did this week......Heavy selling in software and internet stocks were especially troubling. So is its chart pattern. ...On a closing basis, the Nasdaq is at the lowest closing level in more than a year. In addition, the Nasdaq/S&P 500 ratio has fallen to the lowest level in a year. That's a bad omen for the rest of the market. Weekly MACD lines have fallen to the lowest level since 2009. That greatly increases the odds that the Nasdaq will undercut its 2015 lows. That would complete a "double top" reversal pattern which would signal another downleg. If that happens, other major stock indexes will most likely do the same. That would also confirm that the stock market has entered a bear market.
(thanks to Bobo for the link)

Price action in gold was very positive last week and I think it likely the lows are in .The triangle breakoit posted on RRS is looking good !

Posted by Chartrambler at 20:03 No comments:

Recipe of the Day 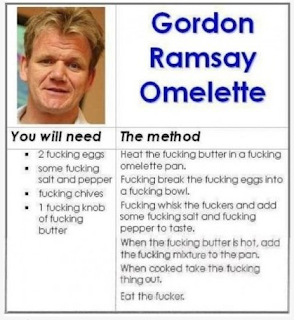 thanks to Wile for this :-)
Posted by Chartrambler at 00:02 No comments:

Thanks to Wile for this ,from Doug Casey

Sociopaths completely lack a conscience or any capacity for real regret about hurting people. Although they pretend the opposite.
Sociopaths put their own desires and wants on a totally different level from those of other people. Their wants are incommensurate. They truly believe their ends justify their means. Although they pretend the opposite.
Sociopaths consider themselves superior to everyone else, because they aren’t burdened by the emotions and ethics others have - they’re above all that. They’re arrogant. Although they pretend the opposite.
Sociopaths never accept the slightest responsibility for anything that goes wrong, even though they’re responsible for almost everything that goes wrong. You’ll never hear a sincere apology from them.
Sociopaths have a lopsided notion of property rights. What’s theirs is theirs, and what’s yours is theirs too. They therefore defend currency inflation and taxation as good things.
Sociopaths usually pick the wrong target to attack. If they lose their wallet, they kick the dog. If 16 Saudis fly planes into buildings, they attack Afghanistan.
Sociopaths traffic in disturbing news, they love to pass on destructive rumors, and they’ll falsify information to damage others.
Doug Casey
Posted by Chartrambler at 21:49 No comments: