"I have no doubt that gun control groups are organized by agents of the police state. The United States is falling apart. All of the increase in income and wealth is going to the top One Percent. Everyone else is hurting more each day. See Chris Hedges, for example: http://www.informationclearinghouse.info/49082.htm
The vast majority of Americans are being ground into the dirt by government at all levels. There is no democracy. There is only looting. The One Percent fear that sooner or later even insouciant Americans might rise up. But they can’t if they are disarmed. That is all gun control is about.
Deaths from what the propaganda “gun violence” shills for the police state hype as a massive problem are such a small percentage of US deaths that they do not even show up statistically. Yet we have all this protest over an infinitesimal number of deaths, and no protests at all by opponents of “gun violence” over police killings, which are larger that “gun violence” deaths or over America’s massive murders on a world scale. Where are the “gun violence” protests over the millions of deaths and millions of displaced peoples in Iraq, Libya, Somalia, Syria, Yemen, Afghanistan, Pakistan? Where are the “gun violence” protests against Trump’s chosen national security adviser John Bolton’s plan to bomb Iran and North Korea into the stone age? "
Posted by Chartrambler at 23:27 2 comments:

FTSE formed a bearish shooting star at critical resistance levels yesterday.It was also a 3rd lower high,which is an acceleration setup.They need to recover 7100 on Monday or it could decline rapidly

Posted by Chartrambler at 12:07 No comments:

On the Verge of Nuclear War
Paul Craig Roberts
One wonders if this latest extremely provocative and hostile accusation against Russia, supported by Washington’s empire, is the prelude to war. There is no basis whatsoever for the statement of the US Department of State that “on March 4, Russia used a military-grade nerve agent to attempt to murder a British citizen and his daughter in Salisbury.”
https://www.zerohedge.com/news/2018-03-26/trump-expel-60-russian-diplomats-shut-seattle-consulate
Considering the fact that no evidence has been presented that any nerve agent was involved, no evidence that it was a Russian nerve agent, and no evidence that Russia, or Putin himself according to the crazed British foreign secretary, is responsible, this accusation is the most reckless and irresponsible charge imaginable.
It the Russians do not now realize that the only terms on which they are acceptable to the West is as a vassal state of the West, they are beyond all hope and will be destroyed. If the Russian Atlanticist Integrationists continue to paralyze the Russian government, Russia is finished. There is no greater threat to Russia than its own Atlanticist Integrationists.
What will be Washington’s next orchestration through one of its vassal states, such as “Great” Britain? Can it get any worse? If the Russian government is realistic, it will expect an incoming nuclear ICBM strike. There is no other reason for the long collection of false charges against Russia except to prepare the insouciant Western peoples for war. If the Russian government does not realize that Washington is bringing war to Russia, the Russian government is endangering Russia’s survival.
If the Russian government continues to believe that “the door to dialogue is open,” the Russian government is deluded beyond repair.
The insouciant Western people, concerned with things of no consequence, sit in their stupidity while their corrrupt politicians tell them lies. The populations of the West are so stupid that they do not have a clue as to the consequences of the lies that they are fed.
Posted by Chartrambler at 09:13 No comments:

bulls might take some hope from this declining wedge.My view is that any rally would only be a right shoulder

Posted by Chartrambler at 09:06 No comments:

https://benwilliamslibrary.com/blog/?p=6110
Paul Craig Roberts "Integrity has vanished from the West"


"Think about the alleged poisoning of Skirpal by Russia. What can this be other than an orchestrated effort to demonize the president of Russia? How can the West be so outraged over the death of a former double-agent, that is, a deceptive person, and completely indifferent to the millions of peoples destroyed by the West in the 21st century alone. Where is the outrage among Western peoples over the massive deaths for which the West, acting through its Saudi agent, is responsible in Yemen? Where is the Western outrage among Western peoples over the deaths in Syria? The deaths in Libya, in Somalia, Pakistan, Ukraine, Afghanistan? Where is the outrage in the West over the constant Western interference in the internal affairs of other countries? How many times has Washington overthrown a democratically-elected government in Honduras and reinstalled a Washington puppet?
The corruption in the West extends beyond politicians, presstitutes, and an insouciant public to experts. When the ridiculous Condi Rice, national security adviser to president George W. Bush, spoke of Saddam Hussein’s non-existent weapons of mass destruction sending up a nuclear cloud over an American city, experts did not laugh her out of court. The chance of any such event was precisely zero and every expert knew it, but the corrupt experts held their tongues. If they spoke the truth, they knew that they would not get on TV, would not get a government grant, would be out of the running for a government appointment. So they accepted the absurd lie designed to justify an American invasion that destroyed a country.
This is the West. There is nothing but lies and indifference to the deaths of others. The only outrage is orchestrated and directed against a target: the Taliban, Saddam Hussein, Gaddafi, Iran, Assad, Russia and Putin, and against reformist leaders in Latin America. The targets for Western outrage are always those who act independently of Washington or who are no longer useful to Washington’s purposes."
Posted by Chartrambler at 09:02 No comments:

the 9 year anniversary of the 2007-9 bear market low did produce a sharp fall in the Dax early last week but it has clawed back most of the losses.I am keenly watching the Spring Equinox on Tuesday see is this has a further dampening impact
Generally people still seem to me  be too complacent and have been conditioned to buy the dips .....
Posted by Chartrambler at 20:06 5 comments:

This year could turn out to be a defining year for the United States. It is clear that the US military/security complex and the Democratic Party aided by their media vassals intend to purge Donald Trump from the presidency. One of the open conspirators declared the other day that we have to get rid of Trump now before he wins re-election in a landslide.
It is now a known fact that Russiagate is a conspiracy of the military/security complex, Obama regime, Democratic National Committee, and presstitute media to destroy President Trump. However, the presstitutes never present this fact to the American public. Nevertheless, a majority of Americans do not believe the Democrats and the presstitutes that Trump conspired with Putin to steal the election.
One question before us is: Will Mueller and the Democrats succeed in purging Donald Trump, as Joseph Stalin succeed in purging Lenin’s Bolsheviks, including Nikolai Bukharin, who Lenin called “the golden boy of the revolution,” or will the Democratic Party and the presstitutes discredit themselves such that the country moves far to the right............."


"The failure of the integrity of the liberal/progressive/left has left the US facing two unpalatable outcomes. One is a right-wing government empowered by the left’s self-defeat. The other is the rise of the Identity Politics state in which oppression will be based on gender, race, and beliefs."


"For a decade the central banks of the West and Japan have printed money far in excess of the increase in real goods and services. This money printing has not caused massive inflation of consumer prices. Instead it has caused inflation in financial instruments and real estate.
The high Dow Jones average is the product of this money printing. Can the central banks stop printing money and allow interest rates to rise, thus collapsing equity prices and pension funds? What would be the consequences?
Militarily, since World War II Washington has relied on its armed predominance to dictate to the world. But now the President of Russia has announced possession of what are from the US perspective super weapons that do not, as some claim, give Russia parity with the US, but give Russia immense military superiority over the US, indeed over the entire Western alliance."
Posted by Chartrambler at 23:49 No comments:

Dax 9 years from the low 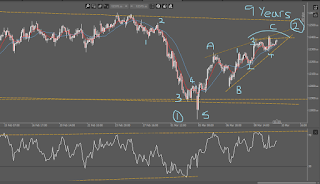 we now have a confirmed lower high on the US indices. Gann said the first lower high was the safest place to sell (with a stop just above it)
The Dow setup was the failure at the 70.7% harmonic retracement  combined with negative macd divergence

(this is a 4h chart I posted live at Danerics.The 40 sma break was the trigger) 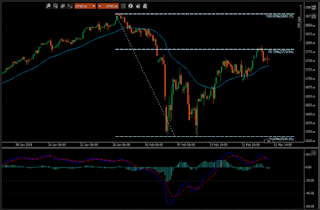 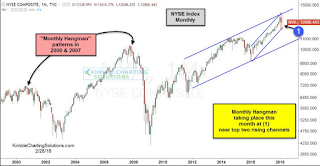 Posted by Chartrambler at 11:44 No comments: