Posted by Chartrambler at 10:37 No comments:

Posted by Chartrambler at 08:43 No comments:

Posted by Chartrambler at 10:35 No comments:

I posted the bearish setup in cocoa at the weekend.....now looking like a major top in place

Posted by Chartrambler at 01:08 No comments: 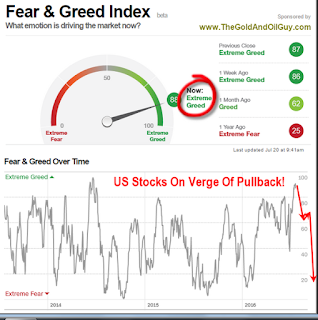 Posted by Chartrambler at 00:58 No comments: 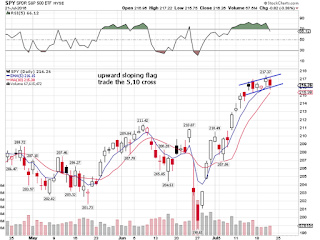 Posted by Chartrambler at 23:53 No comments:

gold should find support from the old highs 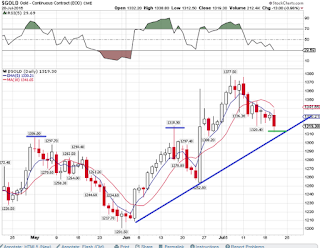 Posted by Chartrambler at 10:01 No comments:

The Dax had a bullish candle yesterday,needs to reverse today to endorse the cycle setup

Posted by Chartrambler at 09:49 No comments:

a good article but written before the S&P made new highs :-) 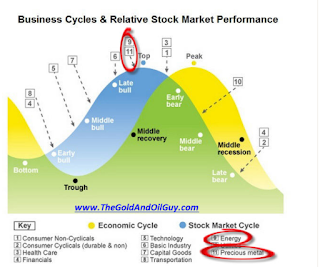 Posted by Chartrambler at 08:50 No comments:

Posted by Chartrambler at 23:03 No comments:

the S&P jumped outside its upper Bollinger band. This usually marks a reversal

Posted by Chartrambler at 22:52 No comments:

Posted by Chartrambler at 19:55 No comments:

from Michael Noonan at Edge Trader Plus

"Most recently, EU ass-licker extraordinaire, Christine Legarde head of the IMF, said that BREXIT would have “disastrous consequences.”  For whom, Christine?  Only for those dependent on that failing political union called the EU.  Only for the bankers that are already in a deep state of unofficial bankruptcy, total insolvency, propped up by phony accounting that does not have to recognize insolvent assets carried on their books.
It is public heresy to go against the interests and dictates of the bankers by first and foremost letting Britain decide on all matters that pertain only to that nation and not being dictated to by an unelected political union with its only mandate being total subjugation by each nation to give up their sovereignty and obey the political union.
As president of the European Parliament, Martin Schultz, stated:  “The British have violated the rules. It is not the EU philosophy that the crowd can decide its fate“.  In essence, people and voters do not matter."
Posted by Chartrambler at 19:09 No comments:

Posted by Chartrambler at 18:30 No comments:

Posted by Chartrambler at 17:53 No comments:

"On the day after the Brexit vote, China stated its desire for the Asian Infrastructure Investment Bank (AIIB) to work closely with World Bank. For years I have been pointing out that the Chinese never had any intention for the AIIB to become a counter-system to the IMF or World Bank and that the Chinese were working with the globalists, not against them. Now we have open confirmation.
The Chinese premier also warned of a “butterfly effect” leading to crisis after the Brexit, and called for “enhanced coordination” among all the economies of the world.
European Union officials are going for broke as they suggest the formation of a European “super state” in the wake of the UK referendum. This system would essentially erase political boundaries and sovereign borders to make the EU a single entity in every capacity up to and including a single European army."
Posted by Chartrambler at 17:52 No comments:

Posted by Chartrambler at 20:54 No comments:


The bull market that never ended has many more years in front of it than you can imagine and a final and permanent price dictated by Russia and China. This is the world war of all world wars where there are no borders. This is why this is the last time to protect yourselves, the gold rally that you do not sell.
This financial power grab of all historical power grabs that you must understand, no matter how many times you must read the article below, will be discussed for years to come by the Freedom Bloggers of the modern world, as Patrick Henry was to the foundation of the Constitution. This work is to save you from yourselves via knowledge. This time it is the knowledge of the plan accepted by Chair Yellen at the recent and rare White house meeting between the occupant of the Oval Office and the occupant of the Chair.
We will work to help you, but this you must understand if you are to avoid the execution of everything we hold from the formation of this nation as true, good and holy. This is the end of all that. It has come. It is not coming in the future. It is here today.
It has the power to be the end of elections and permanent power resting between the oval office and chair, making the 1% the new aristocracy of the globe. You think Putin does not understand this? This proves one more time there are no atheists in the fox hole. War in a different form is now being practiced and all out application is close
Posted by Chartrambler at 11:32 No comments:

Posted by Chartrambler at 23:45 No comments:

I thought this was an apt quote about the EU,although it is actually taken from an article about health in America

"Centralized systems are inevitably hijacked by vested interests in a way that is simply not possible in highly decentralized systems.  Powerful vested interests rig centralized systems to protect and extend their privileges and profits.  This dynamic is a positive (self-reinforcing) feedback loop: the greater the centralization, the greater the influence of vested interests, who increase the centralization that benefits them.
Though it is poorly understood by conventional economists and political scientists, centralization makes it inevitable that the interests that benefit most from centralization (corporations) will serve their self-interests by gaining control of centralized power via lobbying and political contributions.
Once entrenched interests have purchased influence over politicians and regulatory agencies, they use the power of centralized government to limit competition by erecting regulatory barriers.  The regulatory system is soon approving whatever reaps the most profit for the big corporations and restricting alternatives to corporate products.
Before centralized federal and state government agencies and big corporations became dominant, decentralized family-owned farms and grocery stores were the norm. Anyone seeking to control the entire sector faced an essentially impossible task.
Now, a handful of corporations control key sectors of the food/healthcare complex: seeds, chemical fertilizers, processing of food into consumer products, distribution to consumers via grocery chains and the fast-food industry, and the healthcare/pharmaceutical sectors."

Posted by Chartrambler at 23:52 No comments:

a pullback would seem normal after such a strong and violent rally. Today saw a possible 2 bar reversal/twin towers pattern.The following 2 charts are self explanatory. I am backing the first option,but price action will be the final arbiter 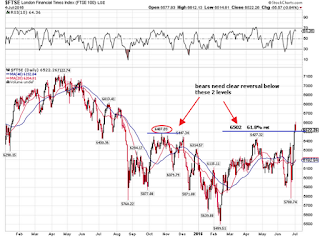 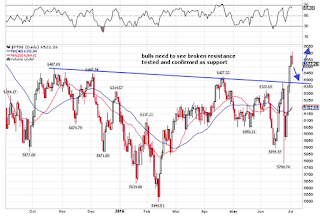 Posted by Chartrambler at 23:02 No comments: 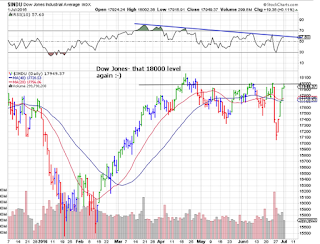 Wow ! .....Diageo has delivered faster than expected with a dramatic breakout from the prolonged declining wedge (see last weeks post)

Posted by Chartrambler at 21:09 No comments:

Posted by Chartrambler at 21:04 No comments:

triple top below a triple top....should be a fast move down setup

this is the Gann angles chart for FTSE (monthly)....it is nearest futures,not cash

Posted by Chartrambler at 15:44 No comments: 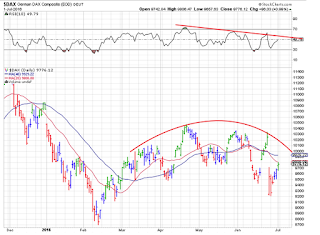 In the din of Brexit fallout, Dr. Joseph P. Farrell posted his own emergency video update to opine that the UK exit from the European Union now frees up that nation "to pursue a path much more independently of Brussels and Washington than hitherto it was able to do. This means they're now in the cat-bird seat to tap into those long term financial infrastructure plans that Russia and China have for Eurasia. Don't forget that Britain is on the AIIB. So is Germany and so is France. All, again, over protests from Washington."It should be noted that Queen Elizabeth is on record as suggesting that there was no longer any reason for Great Britain to remain in the E.U. That fact alone should cause us to wonder if the Brexit vote was in fact rigged, but rigged for a LEAVE outcome, not for a REMAIN outcome. The Queen's mood should also signal to us that "People Power" had nothing to do with the result of the Brexit referendum. Farrell then continues with his bombshell speculation that we could well witness the collapse of the Euro and return of the Deutschmark!


and a slightly different ,more optimistic vew from another "conspiracy theorist",Ben Fulford

"The great weakness among economic analysts and many independent analysts is their refusal to examine the long game of the elites.  They become so obsessed with the day to day parade of stock tickers and the month to month central bank policy meetings that they miss the greater trends.  We can focus intently on each drop of water that makes up a tidal wave and forget that we are at the edge of the beach staring down death.

The Brexit is part of a globalist long game that is designed to finally and completely demonize sovereignty movements.

I realize this is not what many in the liberty movement want to hear, but this is reality.  This does not diminish the value of a British movement for sovereignty, but it does demand that we temper our celebration and recognize when we are being targeted with fourth-generation warfare.  If we accept the fact that the Brexit is an event the elites plan to exploit for their own ends, then we can identify the threat and deal with it.  If we continue the delusion that the Brexit is some kind of slap in their face when it is not, then we allow them yet another weapon in their arsenal of propaganda."

Posted by Chartrambler at 23:26 No comments: